Listed right up there with Word on the Street events hosted across Canada, and glamorous gatherings such as the Vancouver International Writers Festival, The Cabot Trail Writers Festival was cited in Canadian Geographic Travel magazine, September 2012 issue, as being “possibly the most scenic location in Canada for a literary festival, also a purposefully small affair, allowing readers, writers, and artists to engage on a more personal level.”

This year, small as ever, the annual three-day Cabot Trail Writers Festival is back in North River Bridge offering its unique style of workshops, author readings, panel discussions, music, and readers’ market, in intimate gatherings all within walking distance of the beautiful North River.

The festival is the brainchild of Gary Walsh and Jeanette MacDonald, retired teachers and long-time residents of North River. Gary and Jeanette attended a week-long writers’ festival in Bonne Bay, Newfoundland, Writers at Woody Point, some years ago which sparked the idea to have a festival of their own. Their residence at North River Bridge was once the North River school. Their spacious living room, the refurbished main class room of the old school, is exactly right for the kind of intimate gatherings they envisioned for their festival. Combined with the North River Hall just across the bridge, the old pottery shop next door, and the Memorial Hall of St. Andrew’s Presbyterian Church just up the hill, they knew they had the perfect location.

The festival is laid out in an easy paced schedule with lots of coffee breaks, lunches, supper, and musical entertainment in addition to the author readings and workshops. Registration is flexible offering a single day, a single event, or the entire festival package at very reasonable prices. The festival motto is “Join fellow enthusiasts in a weekend of events designed to let readers and writers personally engage with some of their favourite artists”.

Walsh believes there are two main reasons the festival is so successful; one is the calibre of authors who are called upon to present their work. This year’s lineup includes award winning journalist Russell Wangersky, veteran poet and short-story author Frances Itani, and world renowned mystery writer Peter Robinson. The other factor for success is the diminutive size of the festival. With limited registration, small venues, and a homey atmosphere, the festival takes on a very personal feel. Authors become just regular people discussing topics close to their heart, not on a performance level, but on a human level. The relaxed pace and casual feel of the festival makes it an engaging experience for everyone, the participants, the authors, the musicians, and the organizers. A major difference between The Cabot Trail Writers Festival and other literary events is their workshops. This year there are six to choose from, in addition to the author readings and book signings.

The festival is attracting a lot of attention from writers and publishers right across Canada. The authors are paid at current Canadian standards. The festival book store offers only books by the authors who have given presentations at the festival. With an average attendance of 450 to 500 people, there is an opportunity to connect directly with a lot of people. 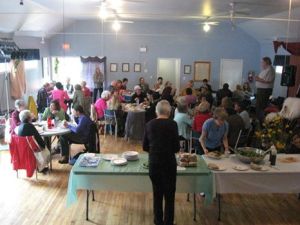 The Cabot Trail Writers Festival is a non-profit organization with a Board of Directors, which also serves as the organizing committee. They are down to just four members this year, Gary and Jeanette, ably assisted by Loreto Doyle, and Mary Ann Wilson. It was a steep learning curve in the early years, says Walsh, fund raising being the biggest challenge. But over time, Gary and Jeanette have secured a loyal band of sponsors among which are Victoria County, Enterprise Cape Breton, Canada Council for the Arts, Nova Scotia Department of Communities Culture and Heritage, together with support from the many artisans, inns, B&Bs, and eateries along the North Shore. While the festival takes pride in its small size, the economic impact on the community is significant. The festival has received a Community Achievement Award from Victoria County.

Each year, The Cabot Trail Festival commissions new work. To celebrate this year, the fifth anniversary of the festival, singer/songwriter Carmen Mikol, and composer, luthier Otis Tomas have been assigned the task of collaborating to create five original pieces of music inspired by the literary works of authors who have previously appeared at the festival. Their music will be presented for the first time on opening night at the North River Hall. Carmel and Otis are both long-time residents of North River, and well known musicians across Cape Breton and beyond.

A satellite event of the festival is a writers workshop for young people in high school in Cape Breton. This year, Mark Black, of Halifax, author of NoMeansNo: Going Nowhere, a chronicle of Canadian punk-rock heroes, a band from Victoria, B.C., will be the workshop presenter. Mark will be putting on four two-hour sessions over two days, Thursday and Friday, October 3 and 4, at the Rankin School in Iona, Baddeck Academy, Glace Bay High School, and Sydney Academy. The workshops can accommodate 10 to 15 students in each session. Interested students from the four schools should check with their administration office to find out how they can enroll for the workshop.

There’s no chance this little festival is going to disappear anytime soon. Gary and Jeanette are more committed than ever and are already working on next year’s programme. But they could use some help. Expertise in fund raising, graphic design, photography, and writing press releases and proposals would ease the workload. Another two or three members on the Board would give them the manpower needed going forward. The festival website offers online registration for the workshops, and complete details on scheduling, presenters, and links to the authors and musicians featured at this year’s festival.  Go to http://cabottrailwritersfestival.com/ for details.