A presentation which was part of the Truth and Reconciliation Commission program took place on Thursday, May 31st, at Wagmatcook Centre, as part of a regular Cultural Lecture Series. The Truth and Reconciliation Commission (TRC) is a component of the Settlement Agreement reached in 2005. Its mandate is to inform all Canadians about what happened in the Indian Residential Schools (IRS). The Commission is documenting the truth of survivors, families, communities, and anyone personally affected by the IRS experience as part of the healing and recovery program essential for First Nations People to regain their dignity, humanity, and way of life.

Over 200 students from Wagmatcook, Whycocomagh, and Dalbrae schools were in attendance.  A profound quiet filled the hall as presenter Vanessa Nevin – Atlantic Policy Congress of First Nations Chiefs / IRS Atlantic Coordinator, gave a broad history of the Indian Residential Schools across Canada. 130 government-funded, church-run schools were in operation from1840 to the final closure in1996. Their purpose was to ‘assimilate’ the Indian peoples into mainstream society. 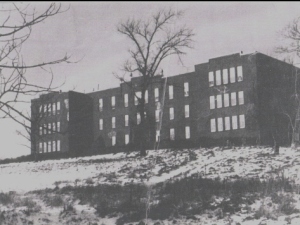 To facilitate the assimilation, children were taken from their families and placed in residential schools. Selected by Indian Agents assisted by the RCMP, some as young as 3 and 4 years old, the children were often taken by force.  Many remained in the schools for ten years or more. Their heads were shaved, they were cleansed and deloused, their clothes replaced by uniforms.  They were assigned  numbers then given new Christian names.  They were taught that being Indian was ‘bad’. They were taught to be ashamed of their parents and culture.  They learned these lessons by repeated punishments, being locked in closets or cellars, being struck repeatedly for speaking their own language.  They suffered emotional and spiritual deprivation, loneliness, physical and even sexual abuse, in what is now referred to as a systematic cultural genocide.

Many of the children received only rudimentary education, learning the basics to read and write.  Most accounts show that child labour was enforced, with children working in the kitchens and farm fields to operate the schools.  Some fared better.  There were favourites, and those that were inconspicuous enough to avoid some of the harsh realities. From the outside, the schools were represented as the epitome of integrity and good intent.  On the inside, for the lost children, it was a nightmare.  It is estimated by some accounts that as many as 50,000 children died in these schools, of abuse, disease, neglect, and suicide.

Lottie Johnson – Survivor & National Board Member, Truth & Reconciliation Commission, is from Eskasoni, and spoke about her experience at the IRS school in Shubenacadie.  She was ten years old when she was sent there.  She remained for 3 years. At school she said she was ‘beaten every day for something’. She said when children were sent home for the summer they tried to tell their parents what was happening but no one would believe them.  When Lottie finally left the school to return home, she was filled with anger and suffered from depression.  By age 23 she was hospitalized for alcohol poisoning.  She eventually learned of Nora Bernard and the ‘talking circles’ and began to meet with other Survivors.  An elder told Lottie to find her voice. Realizing she was not alone gave Lottie hope.  She started speaking out.  At age 39, she said her nightmares finally stopped. Now 67 she continues to travel across Canada meeting with Survivors, sharing her experiences as a healing process, not just for others but as a way of life for herself.

Nora Bernard was responsible for launching the largest class action suit in Canadian history. The Settlement Agreement was reached in 2005 for upwards of 5 billion dollars after Bernard’s efforts led 79,000 survivors of Canada’s residential school system in suing the Canadian government.

Michael R. Denny – IRS Youth Support Worker, Eskasoni Social Health Department, whose father is a Survivor, spoke of the effects on the Mi’kmaq, the Maliseet, Inuit, Metis, and other Aboriginal peoples across Canada, as being profound and long lasting, the ripple effect leeching into generations that follow.  Post-traumatic stress disorder, drug abuse, alcoholism, domestic violence, and incarceration are much more prevalent in Aboriginals than in other cultures.  This is part of the legacy of the Residential School system.

Michael R. made a passionate entreaty to the young people attending the lecture to learn their own language, to study their culture, to honour their elders by understanding what was taken from them, to rebuild the Mi’kmaq culture so it will not be lost.