Since 1938 the Gaelic College has offered lessons both practical and esoteric on the subject of Celtic culture. This year marks the College’s 75th anniversary. One of the great traditions of this unusual college is that its doors are open to everyone.

The Gaelic College was founded by the Reverend Angus William Rugg MacKenzie and began in a simple log cabin, designated as a school devoted to the preservation of Gaelic culture. The grounds where the College stands, on a hill overlooking beautiful St. Ann’s Bay, is the site of some of the earliest Scottish settlements in Cape Breton.

Today there are seven multi-purpose buildings, including a museum, student housing, a gift shop, and an outdoor performance centre. The College has earned an international reputation for its contribution to the preservation of the Gaelic culture. It’s the only institution of its kind in North America. Students from as far away as New Zealand and Japan have come to the Cape Breton campus to study. 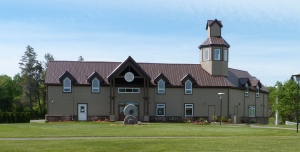 If you come to the College as a visitor and you wish to take the tour, you’ll start at the Entrance Hall to the college grounds which houses the craft shop, the sewing studio, and the administrative offices.

From there you’ll go on to the Great Hall of the Clans which features an interactive museum with 8 stations depicting the history of Gaelic music, language and song, dance, and textiles. The Great Hall also contains a 350 seat performance area, a resource centre, and film room. Here you’ll be treated to some excellent demonstrations which are as much about having a good time as sharing information. The master kilt maker will show you how the original kilt was worn; a swath of tartan six yards long by two yards wide was not only the main article of clothing but bed and blanket at night, turning an ordinary man into a man and a half. The master kilt maker claims that wearing the kilt will improve your golf game by no less than three strokes.

You can learn a few handy Gaelic phrases while you take a turn at the milling table led by one of the fluent Gaelic instructors. Sing along with the milling songs and learn about the secret ingredients used to treat the raw woolen fabric to prepare it for final stitching. You’ll hear a selection of lively tunes by a local fiddler who will take you through the Cape Breton music forms of the waltz, march, strathspey, jigs and reels. You may even learn a few dance steps. The language is rough and earthy, and the Cape Breton music is much the same.

If you come to the Gaelic College as a student you will be well housed at one of the excellent residence buildings. You can learn to speak Gaelic along with a wealth of other Celtic arts, like highland dance, Celtic fiddle, bagpipes, harp, piano, and the Celtic drum, the bodhran. You’ll find much more than classroom lessons at the Gaelic College. You’ll find a sense of living history. Regular classes are offered during March break and throughout July and August. There are also Gaelic weekends in the spring and fall. For the students that stay on campus, there are a multitude of things to do outside of class with regular evening entertainment and events, and friendships made that can last a lifetime.

The College is opened year round. The residence buildings can be booked by groups and tours for all kinds of gatherings. You need only contact the main office for details.
The Outdoor Performance Centre is set at the back of the campus grounds on the grade below the other buildings. Bench style seating is built into the hill and can accommodate 450 people. The surrounding grassy slopes increase the seating capacity to 2,000 in a Roman amphitheatre style setting.

The Gaelic College is also home to the Celtic Colours International Festival, a musical extravaganza that runs for 10 days in the autumn when the colours of Cape Breton are at their best. The Festival Club is open every night at the college and most of the Festival staff and musicians are housed on site. The kitchen is open 24 hours a day. You can get breakfast at 2:00 AM!

The celebrations this year will be spectacular. Concerts and special events will fill the entire summer honouring the history and success of this unique institution. A week-long festival begins June 30th featuring the best music Nova Scotia has to offer. Jimmy Rankin, Ashley MacIsaac, Mary Jane Lamond, and Buddy MacDonald are just a few of the wonderful Cape Breton musicians that will be performing during this season opener.

Find out more about the Gaelic College and how you can take part in the 75th Anniversary celebrations. The College is located at: 51779 Cabot Trail, St. Ann’s, Cape Breton. The website is at http://www.gaeliccollege.edu/