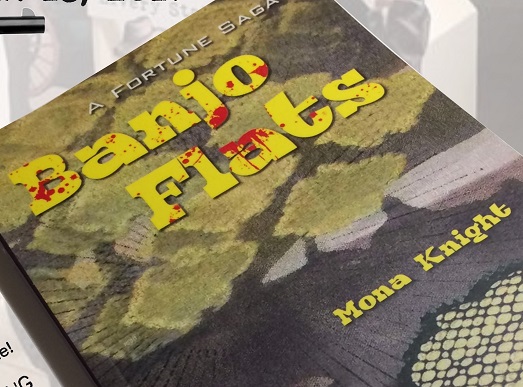 concerns a young woman orphaned at the age of thirteen. The year is 1873. Abandoned on the streets of Cheyenne, Wyoming, she masquerades as a boy to survive. Her mother taught her to read and write. Her father taught her how to handle guns. She’s got streets smarts and is a crack shot which lands her in a heap of trouble after killing a notorious gunfighter the day she arrives in Banjo Flats, the most lawless town in the Dakota Territory.  It’s a time when frontier justice is wielded with a gun. Every shootist in the Territory is headed for Banjo Flats thinking they can earn some easy money by killing the girl gunslinger. They’re wrong.

Here is a video trailer for the book, created by Boularderie Island Press, my publisher.

And, here is a sound recording of me reading the opening chapter.

Banjo Flats is also available in Chapters/Indigo stores across Nova Scotia. Locally (in Cape Breton) you can find copies at The Herring Choker Deli and The Red Barn Gift Shop in Nyanza, Victoria County Creates in Baddeck, and the Curiosity Shop, in Sydney.

Fortune returns home to Banjo Flats in the Dakota Territory where she earned her reputation as a “shoot first, ask questions later” kind of gunfighter. She agrees to accompany the federal marshal to Deadwood to bring back a notorious outlaw, but life gets complicated when she rescues a pair of young orphaned brothers along the road. While in Deadwood she picks up the trail of a lost gold shipment and is forced to confront a dark memory from her past and settle a long-standing score with the cold-blooded Mose Horn.